BEING A PRIEST IN A SYNODAL CHURCH: HOPES, CONCERNS, OPPORTUNITIES

ST THOMAS AQUINAS AND OUR DIALOGUE WITH MODERN SCIENCE

WORLD DAY OF PRAYER FOR THE CARE OF CREATION

CLICK HERE TO WATCH VIDEO ON CLIMATE JUSTICE: https://www.icatholic.ie/climate-generation-lorna-gold/?jwsource=cl Last week, Swedish teenager Greta Thunberg arrived in New York following a journey on a yacht across the Atlantic. She travelled to America to raise awareness of Climate justice which is surely one of the most pressing issues for humanity in the present and for the future. Greta caught the imagination of teenagers around the world by organising a 'climate strike'

"My eternal joy lies buried in your heart and soul. Listen to your body and hear the wonders of my spirit percolate within. The well of my goodness and light, rises up. Every moment is a fresh opportunity to live the laughter of your souls eternal joy. Bathe in the natural. Look around at life's resurrection. Everywhere about you the dance of recovery begins. Listen. Hear seeds growing from darkness to light." "All is light in me. Be awake to the light in a way that connects

LIBERALS FAIL TO PRACTISE WHAT THEY PREACH ABOUT TOLERANCE

In this article, Maria Steen questions how tolerant is our society when one questions certain assumptions and thinks in a different way. Originally published in The Irish Times (24th August 2019) and re-produced here with permission. It is testament to the fact that so little has happened this August that column inches in a number of major newspapers have been devoted to what, by any standards, was a complete non-story: the attendance at a conservative political conference in

While on retreat at Ballyvalloo recently, I caught up with a friend I hadn't seen in a while - Fr Frank Downes. Frank is a Dominican priest who hails from Limerick and who works in the area of leading retreats and offering spiritual direction. Many of us think that spiritual direction is only availed of by priests and religious. However, more and more lay people are also discovering the importance of spiritual direction in their lives and the support of someone who can help t

One of the methods I often employ when preparing my homilies is to think back on the days of my youth (it seems like an eternity ago!!!) trying to recall what other priests have focussed on in their preaching. Thank God, I have been blessed with a good memory, even if my brain cells seem to be on a go-slow nowadays! When reflecting on the passage of the Gospel today (Luke 14), I recall how my brother priests preached, almost exclusively, on the importance of humility as if hu

THE WORLD MEETING OF FAMILIES AND THE VISIT OF POPE FRANCIS – ONE YEAR ON.

This week marks 12 months since the World Meeting of Families took place in Dublin and the historic visit by Pope Francis to Ireland. With the perspective of a year, we look back on five major themes of the World Meeting of Families and the message Pope Francis brought to us. Faith: On 26th August last, before he departed Ireland, Pope Francis spoke to the Irish Bishops and through them to all the people of Ireland. He said: ‘I am close to you: keep moving ahead with courage. 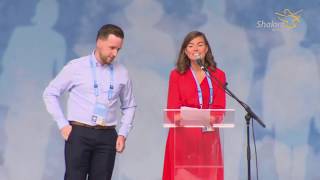 MARKING ONE YEAR SINCE THE WORLD MEETING OF FAMILIES

One year on after the World Meeting of Families and the visit of Pope Francis, we post here a video of testimonies given by young people at the RDS, on their hopes and dream for marriage and the family.

Augustine was born in Thagaste in Africa of a Berber family. He was brought up a Christian but left the Church early and spent a great deal of time seriously seeking the truth, first in the Manichaean heresy, which he abandoned on seeing how nonsensical it was, and then in Neoplatonism, until at length, through the prayers of his mother and the teaching of St Ambrose of Milan, he was converted back to Christianity and baptized in 387, shortly before his mother’s death. August

FAITH IN THE COUNTRYSIDE

The 2016 Catholic Directory tells us that Ireland has 2,652 Catholic churches – one for every 1,725 Catholics. A lot of them are in rural parishes. Dublin diocese has a church for every 4,673 parishioners, while the figure for Killaloe diocese is 897 and 786 in Killala. Even within individual dioceses congregations vary in size, with some country congregations being well under 100 people. Our rural churches were mostly built at a time when these parishes had very large popula

Dear friends. The Gospel this weekend begins with the question of how many of us will be saved. In times past that many of our older parishioners will remember, there was a great fear that we might not be saved - by committing mortal sin we might lose the eternal happiness of heaven and end up in the fires of hell. Nowadays, we rarely hear of hell or of God’s judgment in homilies, despite the fact that Jesus frequently mentions them. We seem to have gone from one extreme to a
1
23