HOMILY FOR THE THIRD SUNDAY OF ADVENT - GAUDETE SUNDAY

PREFERRING JOY TO LAUGHTER THIS CHRISTMAS

HOLDING ON AND LETTING GO

Fr Jim Cogley There are basically two ways we can live life, either with hands that are closed or or hands that are open. As we enter this world we do so with closed fists, ready to grasp, to hold and to control. Not long after we die our hands open out fully as if to make a gesture of letting go and surrender. The spiritual journey is all about opening out and letting go. It is not even about accumulating spiritual brownie points for our attempts to live a virtuous life and

Fr Jim Cogley Society in general only makes judgments in relation to persons. The question of ‘what have you done’ then easily translates into how you should be treated or punished. The question of ‘what happened to you, that you should have behaved in this manner’ is rarely asked, although it is slowly becoming more part of out judicial system, where a person’s background is given some consideration. This is where judgment becomes tempered by mercy. Because something is unde

Fr Jim Cogley The story is told of a notorious criminal in the US who was convicted of several murders and he was facing the death penalty. The prison chaplain visited him shortly before his execution and enquired how he felt at the prospect of dying. He replied that he ‘was actually looking forward to it’. Rather surprised the chaplain asked ‘how come after the life you have led and the trail of destruction you’re leaving behind’. ‘Because’ came the reply ‘for the first time

BEING A PRIEST IN A SYNODAL CHURCH - OPPORTUNITIES

The video recording above was the third and final night of the recent virtual conference on zoom for priests entitled: 'BEING A PRIEST IN A SYNODAL CHURCH - HOPES, CONCERNS AND OPPORTUNITIES'.

THE ADORATION SISTERS IN FERNS - A TRIBUTE

By Christopher Power Ferns were privileged to have a little place of tranquility for over thirty years. The village is far from a metropolis. But for those who wished to escape from the daily rounds of life, who sought spirituality, or were troubled with the many problems that life has a habit of presenting, it had a unique and special retreat for all who needed solace in the form of its convent chapel. This lovely place was the basis of the Adoration Sisters who arrived in F

Fr Billy Swan The feast of St Peter’s chair is a celebration that gives thanks to God for the unique authority that Christ gave to St Peter and his successors in order to maintain harmony and communion in the universal Church. Symbolized by a chair, the office of Peter is a recognized authority that co-ordinates debates, helps solve problems in local Churches and preserves unity and the order of charity in the Church around the world. Establishing unity among people is tricky 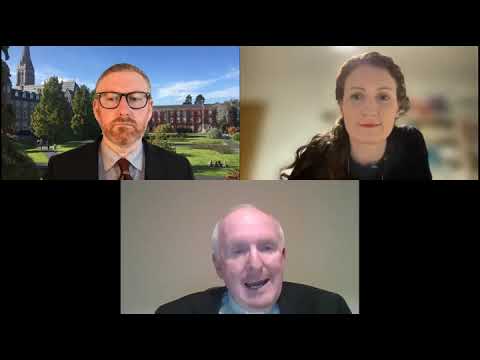 As part of Catholic Schools Week 2022, Bishop Brendan Leahy, Chair of the Bishops’ Council for Catechetics, launched Credible Catholic, a new religious education programme for Catholic Voluntary Secondary School in Ireland. The launch took place as part of a Webinar on Zoom on Wednesday 26 January. Bishop Leahy was joined at the webinar by Dr Alexander O’Hara, National Director for Catechetics of the Irish Catholic Bishops’ Conference; Dr Tom Finnegan, lecturer in theology an

HOMILY FOR THE SEVENTH SUNDAY OF ORDINARY TIME (C)

Fr Brendan Nolan As St. Luke writes his Gospel, he focuses intensely on the total compassion of Christ. It is in St. Luke’s passion account that we read of Jesus, in Gethsemane, touching the ear of the High Priest’s servant and restoring it. Exclusive also to Luke is the magnanimous statement from the Cross, “Father forgive them, they know not what they do. Today as we hear the evangelist dispensing these words of Christ to all ages, heart again speaks to heart. It is the hea

NEWSLETTER INSERT - A SPIRITUALITY OF IMPERFECTION

‘I was raised in a Catholicism which was deeply moral. It took commitment seriously and called sin sin. It was, on most moral issues, brutally uncompromising. It asked you not to betray, not to sin, not to make mistakes. I have no regrets about that. In fact, I feel pain for so many today that are being raised in a moral relativism which excuses too much and challenges too little. However, if the Catholicism that I was raised in had a fault, and it did, it was precisely that
1
2
34